Star Wars Fanon
Register
Don't have an account?
Sign In
Advertisement
in: Blogs by Brandon Rhea, The Chosen One blogs, Blog posts

THE CHOSEN ONE: Chapter 12 release 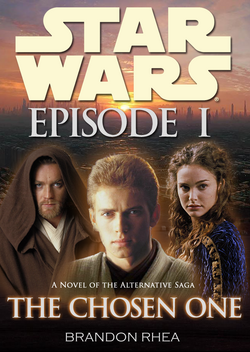 For those of you who are still reading the book, Chapter 13 and Chapter 14 are still on track for next week, so I’m not worried about this chapter’s release putting me off track. I just want you to have as great a reading experience as possible, and the teaser at the end of this chapter, IMO, will make you want to keep reading, and the break between now and the release of the next two chapter’s next weekend should make you anticipate the next releases a bit more.

So in Chapter 11, we saw Sarus leading Annikin Skywalker, Obi-Wan Kenobi, and all of the others out into the Dune Sea, where they found the Ophuchi Sanctuary and learned a bit about the Ophuchi Clan. They enjoyed a great feast, but eating wasn’t the reason they walked through the desert for six hours. Sarus has information about the fate of the galaxy, which is revealed in Chapter 12.

The Prophecy of the Chosen One about a galactic savior.

Who is this Chosen One? What is his or her destiny and why is his or her life so important? Is he or she the only one with a destiny, or are there more people involved than initially believed? Do the Jedi even agree with this idea that there could still be some sort of savior? Find out all of this and more in the twelfth chapter of The Chosen One!

As always, I also want to thank my editor, Solus. There were some issues with this chapter, mostly in that I felt it didn’t have the right “feel” to it. The major, yet obvious, revelation in this chapter really needs an epic, mystic, etc. sort of feel to it, and Solus helped me add that in, along with some character stuff.