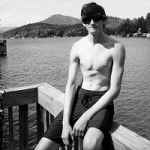 Hello there, <insert name here> welcome to my profile page!

I'm TheKyberKnight88 (previously TreshersliderOfficial) or also called J.D Tresherslider, a massive Star Wars fan and writer. I'll edit here from time to time, but if you would like to contact me just do so on my message wall.

My Star Wars story began when I was five when I saw a poster with a bunch of movie characters on it. In the lower right corner was a man in a black suit of armor holding some kind of sword. My mentor asked me if I knew that was. "No." I said. "He's Darth Vader...from Star Wars!" He told me. Later that week he showed me all six films (at the time). After that, I played LEGO Star Wars II which further cemented my love for Star Wars.

Star Wars has great impact on me, 13 months old I was diagnosed with Cerebral Palsy which means I can't walk and must have treatment and therapy constantly in the hospital. I would tell myself this: "If Luke can become a Jedi, then I can get through this too." My top three favorite movies are:

3. Rogue One: A Star Wars Story

Today, I'm a huge Star Wars gamer. I've played Empire at War, Knights of the Republic I and II, both installments of the Force Unleashed, the Battlefront series and more. I even play the MMOs, I was Arriurra the Wookiee on Star Wars Galaxies, Jack Tresherslider on Clone Wars Adventures and Jacen Tresherslider on Star Wars: The Old Republic. When it comes to my main characters, they all have a piece of me. For example, Jacen is based off my physical appearance and life story. Jack on the other hand, shares the same initials as me. Meanwhile, I see Arriurra is the symbol of my strength. However, all three share the core traits of my personality. I came here to give them a home, a home where they'll be enjoyed and loved. So, I hope you enjoy the content I'll releasing.

Retrieved from "https://swfanon.fandom.com/wiki/User:TheKyberKnight88?oldid=1186505"
Community content is available under CC-BY-SA unless otherwise noted.