I am Red Head Rider. I've been a user here for two years. I've gone from this to this. That said, I still have much to learn and I am enjoying growing as a writer. Just as a note, I have chosen to stop writing articles pertaining to Sith and Jedi. There are several reasons for this. One, there are already many, many Sith/Jedi articles on this cite. Moreoever, I want to create something more original. The second, and main reason, is that I have fallen in love with the more "realistic" areas of Star Wars. Crime and politics currently hold my fancy.

I'm afraid that my userpage is not very interesting. But please, sign the quest book. If you wish, you can checkout my userboxes my and better articles.

Let me know you're come.

Me in a nutshell

It appears that some users have given into despair. And, let's face it, their worries are justifiable. But I've been a member of this Wiki for a long time. I remember when Star Wars Fanon was a realy sorry looking place. And yet, we managed to give this Wiki the appearance of grade A treasure. We can do it again.

We have to stop counting on the Admins to do all the work. It is up to ever user on Star Wars Fanon to jump start this Wiki (again). Start browsing the Resent changes. Add categories. Fix grammar/spelling errors. Pursue perfection.

There is no need to give up just yet. If I can quote PotC, no cause is lost as long as there is one fool left to fight for it. Let's be fools. LEt's change Star Wars Fanon. Let's become the best Wiki imaginable. And let's do it now. 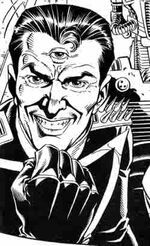 The Cilwelli, also called Cilwellians, were a primitive Near-Human species native to Cilwelli. They were characterized by their distinct third eye, known as a tyreal. In some members of the species this eye had hypnotic effects on weak-minded beings. Because of the harsh conditions of their homeworld, violence was an accepted part of life for the Cilwellians. To keep the war-like people from destroying each other, an Aulsur in the Pre-Republic era brought the various tribes under a single banner and established a strict code of conduct. This code was followed well into into the days of the New Republic.

Even after the Cilwelli came under Hutt rule they remained highly traditional. Because their laws deemed submission to higher beings a great honor, they were often taken advantage of by the Hutts, and later the Galactic Empire. However, it was the same strict honor-code that would ultimately save them from their abusive masters. Under the command of the priest, Sincol, the Cilwelli fought back by joining the Rebel Alliance and freeing their homeworld.

From that point onward, the Cilwelli would remain an active part of galactic politics. Thanks to a treaty signed by the New Republic, the Cilwelli were finally given their freedom after nearly 30,000 thousand years of Hutt domination. However, their liberation would be short lived. The Vuuzhan Vong war saw the destruction of their homeworld and the near extinction of the Cilwelli race. 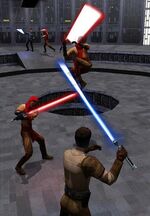 The Great Galactic Civil War was fought fifty years after the formation of the Republic. The war was fought between the Galactic government and the Monarchy-Democratic Party, better known as the MDP. The divided both the Republic and the Jedi Order. Right before the war the Jedi had explored many previously unknown worlds, rallying more Force-sensitive creatures to their Order. The result was a diverse organization that had various opinions about life. At the start of the war the public support was split almost evenly, however, as the terrorist acts of the MDP mounted high civilian casualties, most favored the Republic by the war’s end.

At the start of the war the people elected one of their proudest Founding Fathers, Nussle Aramadala. of Naboo. His running mate was Grey Jedi and former spacer, Mi Trelmark. At the same time a senator named Zargayus Xerime began spreading rumors about the new Republic’s inefficiency. He said that such a large space would not be ruled by committee and that Republic was nearing complete clasp. Therefore he founded the Monarchy-Democratic Party.

I've been a user at Star Wars Fanon for a long time. I have improved greatly since I first arrived. In resent months I have established a general continuity for my series. My "canon" centers around the Cilwellian people. Some of my older articles that do not relate to his series are no longer considered a part of my continuity. Examples enqlude, Rider and Great Galactic Civil War and Zungti War. Other articles are not a part of my most resent series, however, are still considered a part of my over all canon. These articles are ussaully second-rate, but not extremely horrid. Examples are Merraxen and Aanor. Other articles, like Dan Eardornn, are connect to my new canon because they have links to those articles.

Rules to live by

Retrieved from "https://swfanon.fandom.com/wiki/User:Red_Head_Rider?oldid=758559"
Community content is available under CC-BY-SA unless otherwise noted.