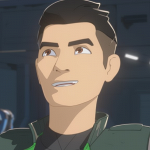 Hello there. :) I am MasterFred, known on Earth as Robert Pierce. If you wanna know more about me, visit my Wookieepedia userpage here, as I'm too lazy to retype it all. :P

Below is what I'm currently working on. Feel free to give advice on my talk page. Be nice, though. I'm out of writing practice. :P

The First to Stand

The First to Stand is the first in a ten-piece collection of short stories which record the events of a rebel Jedi malitia during the reign of Darth Krayt. The story is currently being written by Master Fredcerique (MasterFred). It is expected to be completed by the end of summer 2011.

In the year 133 ABY, a group of Jedi gathers on the planet Gatheron to discuss attempts to obtain all the information stored in the Imperial Archives on Coruscant. These plans are necessary for starting a rebellion which would overthrow the Sith empire and bring peace back to the galaxy. The secret to the location lies in an Imperial sentry on the planet Iliahu. A group of five Jedi set off to find what lies on the planet in hopes of birthing a new army of opposition against Krayt and his followers. The Jedi arrive on Iliahu and infiltrate the sentry, but find that all the information they needed has been erased from the computer systems and moved to another location. Meanwhile, back on Gatheron, the rest of the council ponders new ways to gain recruits and sympathizers. During a mishap in the planet's capital, Jedi Carl Chiin discovers vital information on the where-abouts of the information from Iliahu. He rushes back to the safety of the coucil base only to find that the Jedi are out of contact and stranded in the sentry. A rescue force is quickly assembled to save the Jedi from their predicament.

Retrieved from "https://swfanon.fandom.com/wiki/User:Master_Fredcerique?oldid=724922"
Community content is available under CC-BY-SA unless otherwise noted.