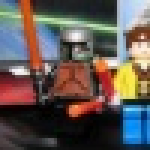 Long Island born author. Fell Skyhawk is a poor article writer, and is helpless without spell check. His talents as an author are in world building and in story development.

My favorite things about Star Wars include the starships, technology, and several characters. My favorite characters include Jaina Solo, the original Jacen Solo (YJK series), Jango Fett, Darth Revan, T3-M4, and many more. The thing I probably love the most about Star Wars over other sci-fi universes is Mandalorians, both as a culture and in their armor/dress.

Most of my work is in summery form for Star Wars fan-fics. So far my only true fan-fic story of Star Wars out there is Star Wars: [[Young Jedi Knights- Promises]], which can be found on a google site here.

Fell Skyhawk originally was the name of a fannon character that bridged multiple universes for the use of one Phillip DeVeau. At the time he was unable to use his real name due to high school regs. Fell Skyhawk then became the pseudonym for any work created by Phillip, and finally became a character in his own Sci-Fi universe, Atalia.

Retrieved from "https://swfanon.fandom.com/wiki/User:Fell_Skyhawk?oldid=905302"
Community content is available under CC-BY-SA unless otherwise noted.