The Fog of War

The Devils Inside the Walls

A Certain Point of View 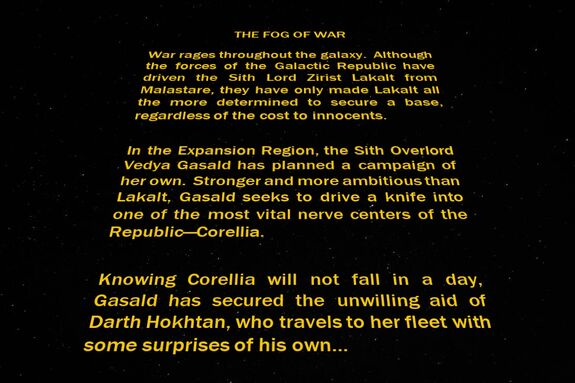 Darths Hokhtan, Alecto, and Vandak journey to the Kiss of Death, flagship of Sith Overlord Vedya Gasald, an equal and rival of Darth Saleej. The three have been "loaned" to Gasald for her upcoming assault on Milagro. Though she gives the command to her own second, Halicon Karzded, and shows signs of wanting to divide and expose Saleej's Sith, Hokhtan manages to turn the tables somewhat by revealing they have brought along a dozen Anzat assassins in Vandak's private army, the Brotherhood of Shadows.

Meanwhile, Tirien Kal-Di and Narasi Rican remain aboard the Crescentia in the wake of the Battle of Malastare, a Republic victory over Zirist Lakalt. Mali Darakhan arrives aboard with his apprentice Aldayr Nikodon, bearing bad news that Jedi Battlemaster Argus Z'dar has left the Jedi Temple unannounced, and Lakalt is gearing up for a comeback attack. Moreover, Corellian Jedi Master Tyson Dumiel plans to support a resurrection of an independent Corellian Jedi faction, leaving Mali awkwardly between his homeworld and the Republic.

Within days, Gasald and Lakalt both attack Milagro. At Mali's fervent request, Tirien joins him in urging the Praxeum Council to authorize a mission against the Sith incursion. Meanwhile, Narasi and Aldayr maintain an awkward, standoffish relationship; Aldayr has become more reserved and grim since the last time they met on Taanab two years before. When the Council turns down Mali's plan, Mali decides to go anyway. After much soul-searching, Tirien agrees to go as well; they are joined in rebellion by both their Padawans and fellow Knight Slejux Nissatak. Umbaran Jedi Master Sil Kadych, the sole vote in favor of the mission, unearths the conspiracy and mocks Daragon for his cliché heroics and for leaving Aldayr in the dark about Dumiel's plans for Corellia, but agrees to accompany the mission anyway.

Unable to reach the Kiss of Death and assassinate Gasald, Tirien pilots the Second Chance through the blockade instead, and the Jedi split up to reconnoiter. Mali and Aldayr's relationship is clearly strained, but they make contact with police commander Jossi Feld. Meanwhile, Tirien, Narasi, and Kadych rescue a small insurgency from a dark side adept and his Sith troops, and discover the presence of Darth Vandak and his Anzati. Uniting a number of budding resistance cells under cover of darkness, the Jedi discuss the implications of Vandak's presence in Gasald's campaign.

Dissatisfied with the progress of the Milagro campaign, Gasald orders Karzded to secure the planet, and subtly advises that Hokhtan and Alecto be disposed of if possible. While the Sith repel the last of Lakalt's forces, the Jedi seek to protect the Milagroans from Vandak's Anzati. Tirien and Mali clash frequently over tactics and the underlying ethics of their mission. Narasi and Aldayr manage to kill one of the Brotherhood, leaving distinctive lightsaber marks on his corpse. Vandak is incensed, blaming Gasald for the killing, while a wounded Darth Hokhtan commands him not to retaliate. Sensing they are surrounded by actual and potential allies on all sides, Alecto buys time for the fragile cooperation by suggesting that Jedi may be among the Resistance's ranks and planning a trap for them if they are.

The Sith issue a covert hint of amnesty in exchange for the surrender of Jedi, and the Jedi strike team members suspect their welcome is wearing out while smugglers Nal and Kadelle Chun, stuck on the planet due to the blockade, try to plot their own way offworld. When the Resistance comes to them with plans to liberate hostages, the Jedi agree to provide a diversion by attacking the Sith government center. In the ensuing battle, Mali, Aldayr, and Kadych challenge Darths Vaszas, Hokhtan, and Kra'all, while Tirien, Narasi, and Slejux go to rescue the hostages in the government center. Tirien and Narasi are quickly diverted to duel Darth Alecto and her acting aide, Zeff Rogu. While Narasi fights Zeff, Tirien duels Alecto while hinting at his suspicions that there may be something in her worth redeeming.

Kadych kills Vaszas and incapacitates Hokhtan, but is himself brutally injured by Vandak. Mali takes on the Anzat Sith alone, but sends Aldayr for help. Tirien manages to separate himself from Alecto to go to Mali's aid while Narasi and Aldayr try to secure their exit, only to find the Resistance has abandoned them to a legion of Sith troops. Slejux joins them to repel fire, and they are delivered at the last moment by the Chun sisters, who fly them to the Second Chance.

Tirien and Mali suffer serious injuries fighting Vandak in a room that is actively burning down, but manage to maim him, cutting off both his brain-eating proboscises. In his moment of agonized horror, they Force push him through a wall and secure Kadych while Alecto pulls Hokhtan away from the flames. Fleeing to the top of the government center, the Knights are rescued by the Second Chance. Narasi runs the blockade with the Chun sisters' Rogue's Gambit flying cover for them, and Mali gets himself together enough to warn Gasald that he will return.

The Jedi flee to Corellia to recover, although Kadych is so badly injured that he must be left there. Tirien and Mali have new respect for one another's perspectives, and enter a Concordance of Fealty to learn from one another. Mali apologizes to Aldayr for keeping the Corellian Conclave from him; Aldayr is noncommittal.

The Jedi High Council meets in special session to discuss the debacle, but is bitterly divided on how to handle the situation. The Council ultimately agrees in a divided vote to leave Tirien, Slejux, and Narasi's fates to the Praxeum Council. Mali, however, is considered a crucial voice in favor of the mainstream Order at Master Dumiel's Conclave, and so the Council agrees to spare him any further punishment, though it plans to re-assign him to the fight against Valin Aresh, far from Corellia.

Alecto's justification for aiding Tirien and Narasi in Who You Are in the Dark (encouraging others to save her life in the future), as well as her remark that Tirien "only get[s] one" such save, was inspired by #68 on the Evil Overlord List.

Mali Darakhan's code phrase for Kadelle Chun ("There's a fog over Celadon City") comes from The Stele Chronicles, in which Imperial Admiral Mordon gives the same phrase to Maarek Stele.

The working title of The Fog of War was Concordance for five months; Sakaros changed it less than a week before the publication date based on the overall narrative.

The Fog of War originally ended with Part 22; SavageOpress1138 mentioned having envisioned a scene with the Jedi High Council, and Sakaros liked the idea so much he wrote Part 23 as an epilogue of sorts.

Retrieved from "https://swfanon.fandom.com/wiki/The_Fog_of_War?oldid=1119209"
Community content is available under CC-BY-SA unless otherwise noted.