Start a Wiki
There is a tide in the affairs of men, which, taken at the flood, leads on to fortune.—William Shakespeare, Julius Caesar

Taken at the Flood

A Bittersweet Homecoming
The Will of the Force

The Heirs of Mizra

Taken at the Flood is the twenty-third installment in Sakaros's Untitled New Sith Wars series. After the Battle of Allanteen, the last Sith Lords of Vedya Gasald's territory convene in an attempt to salvage their fief. 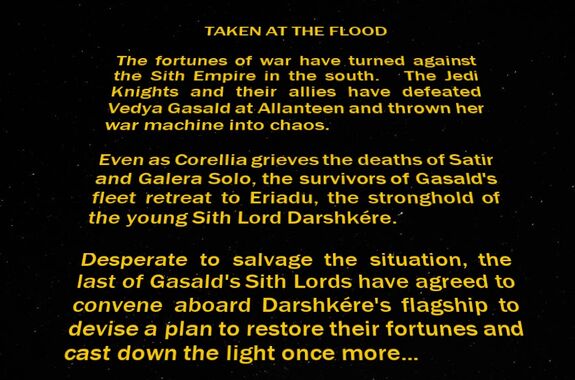 Shortly after the Battle of Allanteen, Sith Lord Misen Deech, along with the other Sith Lords who survived Vedya Gasald's defeat, takes a shuttle aboard the Triumphant Successor, the flagship of Gasald's newest Sith Lord, Darshkére. Lord Besnasc, who resents being "summoned" to Darshkere, worries how the Council of Five will react to Gasald's defeat, suspecting they will want someone to blame.

Darshkere brings the dozen survivors of Allanteen into a conference and contacts two Sith Lords in the far recesses of Gasald's territory by holo, so they can all choose their course. The council rejects Darth Nyewlk'ek's plan (an immediate counterattack to retake Allanteen) and Besnasc's strategy (hunkering down in place to wait out the Republic and see how the Council of Five reacts). Several Sith Lords fear that, if they betray the extent of their weakness, Sith Overlord Trayvin Osydro will exploit it for his benefit and further weaken their position.

Darshkere pitches his own plan: "Operation Back Door", a blitz through several systems to forge a stable Imperial route between his own fortress world of Eriadu and the back reaches of Gasald's territory. Several Sith Lords are supportive, but believe a new Overlord is needed to effectively implement the plan. At the suggestion of Darshkere's apprentice, Bregin Bymar, the council entertains the idea of electing an Overlord, rather than waiting for the Council of Five to appoint one and missing a crucial opportunity. The idea causes dismay, but fear of Osydro's manipulations and the Jedi causes the council to lean toward it. After Besnasc refuses Darshkere's nomination and Lord Aldelkeugh demurs, Darth Nyewlk'ek nominates Darshkere. After a brief discussion, the council unanimously elects Darshkere the new Overlord—some in genuine support of him, some for lack of any viable alternative, and some just hoping the Council of Five will fix its wrath on him and spare everyone else.

After the vote, as Darshkere and Bregin prepare their first strikes, Sith Lord Lady Teyjean approaches Darshkere and frankly asks how long he has been planning to become Overlord, believing he subtly manipulated the council to elect him. Darshkere admits that he had the plan in mind since Gasald anointed him, claiming he would never have betrayed her, but he knew his recent defection to the Empire made him vulnerable if anything untoward happened to her. Pleased by his candor and his obvious ability to manipulate others and take the long view, Teyjean pledges him her support.

In discussing avenging Gasald with Teyjean, Darshkére remarks, "it isn't personal at all. It's just business", a nod to Michael Corleone's famous line in The Godfather.

The novella was titled Triumphant Successor until the last moment; as with "Jedi Trap" as a title for Moments of Truth, Sakaros felt it would give away the ending.

Retrieved from "https://swfanon.fandom.com/wiki/Taken_at_the_Flood?oldid=1181377"
Community content is available under CC-BY-SA unless otherwise noted.