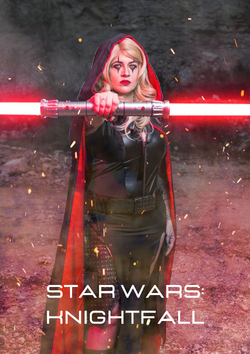 Star Wars: Knightfall is a novella series founded and directed by PotterGrangerous and written by him and Captain Ricky. It narrates the war between the United Galactic Republic and the Sith Galactic Empire, while concurrently narrates the story of Darth Hazelyn as well. It is edited by Potter and Ricky. It is the third and final installment of the Keepers of Truth story compound, a collection of three series pertaining to the same timeline, going from the Clone Wars until the fifth decade ABY.

"After The Force Lives Beyond and War Within, Star Wars: Knightfall takes the reader to a Galaxy filled up with tension and political drama, alongside mighty characters and powers, engulfed in a war that will definitely set the destiny of the Galaxy"

The series' founder, PotterGrangerous, pretends to write at least seven stories within Knightfall, but is still discussing the matter with his co-author, Captain Ricky. These are the confirmed books so far:

Retrieved from "https://swfanon.fandom.com/wiki/Star_Wars:_Knightfall?oldid=1180015"
Community content is available under CC-BY-SA unless otherwise noted.