Sins of the Father

Sins of the Father is the eighteenth installment in Sakaros's Untitled New Sith Wars series. When Tirien Kal-Di and Narasi Rican are sent to Hutt Space to acquire a weapon of mass destruction, Narasi is forced to confront her past and determine her future as a Jedi. 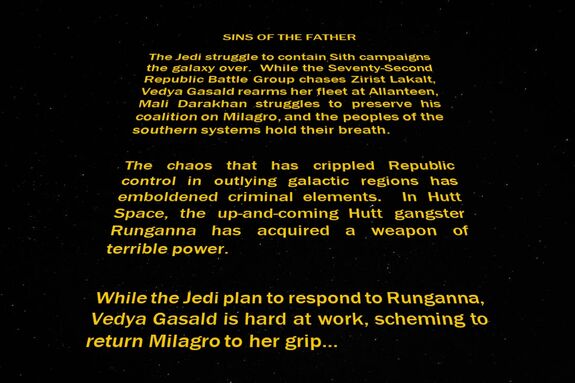 As Vedya Gasald prepares her campaign to retake Milagro more than four months after Mali Darakhan liberated it, Tirien Kal-Di and Narasi Rican return to the Crescentia from Columus, where Tirien failed to convince the Columi to use their cloning technology to reproduce livestock for the Republic's food shortages. No sooner have they arrived on the Crescentia than they are dispatched again, going to Circumtore, where Runganna the Hutt is auctioning a high-value item which Republic Intelligence believes to be a nuclear bomb. Before they leave, they learn that Zirist Lakalt has been killed and usurped by his apprentice, Darshkére.

On Ryloth, the Sith Lord Tarni Hadan has received the same invitation, and she sends Sith Knight Izkara Raltadus and Izkara's apprentice, Zaella Sabir, to bid on her behalf. Zaella is eager to prove herself and rise from the brutality and torture common in the apprentice ranks.

On Circumtore, Tirien, Narasi, Izkara, and Zaella all arrive and present themselves to Runganna; all eventually discover the presence of a pair of Mandalorians bidding on the bomb too. Vedya Gasald receives information about the auction and Tirien's presence, and instructs her chief of intelligence, Celop Faro, to activate one of her agents in Hutt Space. As Tirien and Narasi try to get more information, Narasi foils an assassination attempt on her while Tirien hears confusing news about a Jedi queen on distant Guudria. The Mandalorians encounter San Pavac, a fellow Mandalorian but a mercenary and assassin, and tension ensues between them. Narasi and Tirien encounter Pavac too, and Narasi nearly murders Pavac when he casually admits having killed her parents.

After extricating them from the situation, Tirien compels Narasi to confess her past: her father, Shaelo, was a notorious and successful slaver, but was eventually unable to make quota and captured Sith citizens, selling them right back to the Empire. When the Sith discovered the truth, they demanded Shaelo's head, and the Zygerrians put a bounty on him. The Ricans fled from world to world for a year before a chance encounter with a Jedi, when Demi Rican surrendered her daughter to the Order to save her from being murdered. Tirien comforts Narasi, but makes clear that she must resist the temptation of the dark side to get revenge on Pavac. Unbeknownst to them, Runganna's vizier, Darqyren Valt, reviews the security holos and brings the confrontation to Runganna's attention.

Zaella, taking advantage of Izkara's brief absence, takes spice and has a moment of enjoyment, but an encounter with Narasi nearly brings them to blows before Tirien separates them. After a confrontation with Black Sun and an assassination attempt on Runganna that Tirien foils, Runganna finally begins the auction. When the Republic and the Sith deadlock, with Tirien offering millions of credits and Izkara thousands of slaves, Runganna tricks all three representatives into a "contest of champions". Only when they have agreed does she reveal that it is not Tirien, Izkara, and senior Mandalorian Damis Myragon who will fight, but Narasi, Zaella, and Arkyr Rentol.

While Tirien castigates himself for his carelessness, Damis and Arkyr debate whether winning the bomb is worth drawing the ire of the Jedi down on Mandalore. Determined to win back her master's trust, Narasi agrees to fight in the contest. When the Mandalorians withdraw, the Jedi believe Narasi will fight Zaella alone, but once the contest begins, Runganna reveals her champion: the Force-resistance Dashade mercenery Ghrond Farshyk, clad in Mandalorian iron armor.

After a truel in which Ghrond nearly kills both apprentices, Narasi and Zaella team up to bring him down. They successfully kill Ghrond, but Zaella turns on Narasi. Narasi gets the upper hand and disarms Zaella, but as she prepares a killing blow, Zaella begs for mercy and Narasi spares her. Izkara tries to kill Zaella, but Tirien defends her, declaring that "the mercy of one Jedi is the mercy of all Jedi".

Rather than admit defeat, Runganna forces Narasi to fight San Pavac as well. As she struggles against him, his taunts and his crimes against her family push her into rage, and she draws on the dark side to bring him down. When he is at her mercy, she nearly executes him, but holds herself back at the last second. As she leaves him, he tries to blow her up with a grenade, but Arkyr shoots him in the head. When Runganna still refuses to concede and tries to take the Jedi prisoner, Tirien kills all her bodyguards, stopping a blaster bolt from the last; Izkara tries to kill him in his moment of distraction, but Narasi protects her master and Tirien kills Izkara with the blaster bolt.

Narasi and Zaella free Runganna's slaves, then join Tirien to get the bomb to the Second Chance; the Jedi take Zaella as a prisoner. As they leave, Darqyren Valt contacts his true confederates in the Breld Syndicate, while, at distant Allanteen, Vedya Gasald celebrates the success of her plan.

If Star Wars is going to inflict a ring-shaped planetoid on fan-fiction writers, then Sakaros will be there to look into it and write its properties accordingly.

The scene in which Tirien pistol-whips a Hutt lackey with his own blaster was inspired by this scene in Tombstone.

Tirien's advice to Narasi about not focusing on the moment at the expense of the long view inverts Qui-Gon Jinn's advice to Obi-Wan Kenobi in The Phantom Menace.

Retrieved from "https://swfanon.fandom.com/wiki/Sins_of_the_Father?oldid=1119234"
Community content is available under CC-BY-SA unless otherwise noted.