Sins of the Father

Revenge of the Jedi

Moments of Truth is the nineteenth installment in Sakaros's Untitled New Sith Wars series. Tirien Kal-Di and Narasi Rican journey to distant Guudria to investigate rumors of a Jedi queen, while struggling to reform their captive, the former Sith apprentice Zaella Sabir. 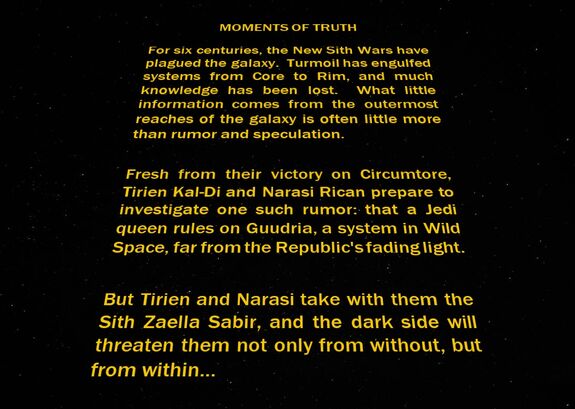 Years before the events of the story, Jedi Knight Vol Aldauk, a Jedi martial arts instructor, is interrupted by Jedi Master Coshal Cuyvalsa, who has come to find her new Padawan. She identifies Maia Kyss, foreseeing that Maia will be responsible for the downfall of a terrible Sith blight.

In the present, Tirien Kal-Di and Narasi Rican bring their new captive, the Sith apprentice Zaella Sabir, aboard the Second Chance and set out for Guudria, where they have heard a Jedi queen rules. Tensions are sharp between Zaella and Narasi, exacerbated by Zaella's wounds fighting Ghrond Farshyk on Circumtore; Zaella is more afraid of Tirien, and she rebuffs the Jedi's solicitousness over her injuries.

When they arrive on Guudria, the trio land in Marekka, one of dozens of villages circling a central settlement. Tirien and Narasi are disturbed when the Guudrians greet them with fearful worship, and they try to correct the Guudrians' understanding of the Jedi while learning about the local culture. Zaella and Narasi continue to butt heads, but when the injured tip of one of her lekku becomes infected, Zaella reluctantly trusts the Jedi to cut it off so she does not lose the whole thing. As she recovers, she and Narasi tentatively start to open up to one another. Tirien, meanwhile, carries out judgment on behalf of the village leadership while instilling Jedi mercy, and has many debates and discussions with Jebba, a priest of the local Church of the Jedi.

Narasi and Zaella begin sparring together, though Tirien makes them stop when Narasi starts learning Juyo in defiance of his orders; he tries to ease her frustration by reminding her that, with everything else going on, he has to trust her. In a moment of meditation, Tirien perceives the powerful taint of the dark side on Guudria, as well as a warning from the Force: It is not what it seems. The next day, the Jedi queen, Maia Kyss, arrives in Marekka with her accomplices, Bras Kozondo and Jirdo Yushari. After a confrontation, Maia imposes a quarantine on the village; retreating to her castle, she, Bras, and Jirdo agree on the need to not fail now, when the work they are doing—which she believes will bring her destiny to its culmination—is in its final stages.

The three Guudria Jedi attack the village in different ways each day, while Tirien, Narasi, and Zaella join forces to protect it. After several days, Maia meets with Tirien, begging him to trust her; he offers her the chance to repent and surrender, but she refuses; on their way back to Marekka's Big House, Tirien, Narasi, and Zaella are accosted by a living shadow radiating the dark side, which Tirien barely drives off. The following day, Maia attacks Marekka with a host of new dark side powers, though she is clearly suffering physical blowback. After Tirien and Narasi wound her, she flees, but only a few hours later, Jirdo arrives and surrenders himself to Tirien and Narasi, fearing something terrible is going to happen.

He is quickly proven right when Bras attacks the village, wielding fiercer powers and suffering greater disfigurement than Maia. He kills several Guudrians and destroys the tree at the heart of the village, but after a great struggle, Tirien forces him to flee. After they have tended to the wounded, Tirien, Narasi, Zaella, and Jirdo realize that Bras was possessed by a Sith spirit, and that a tomb is located on Guudria. They follow Jirdo's directions to the tomb, where they find Maia and her entire guard dead, and Bras burned alive from the inside out. In the bowels of the tomb, the four confront Chelgodrû Brokkodd, who possesses Narasi; while Tirien keeps her at bay, Jirdo and Zaella destroy his tomb, breaking his connection to the living world.

In the wake of Brokkodd's defeat, Jebba—now Boss Jebba—plans to convene all the village bosses to decide their next course, while the Jedi and their allies recover. Tirien and Narasi take Jirdo from Guudria as a prisoner, with Zaella between worlds—her commitment to the dark has been loosened, and both Tirien and Narasi intend to speak on her behalf to the Praxeum Council of the Crescentia. When they arrive at Vondarc, however, they discover that Darshkére and Vedya Gasald secretly joined forces and ambushed the Seventy-Second Republic Battle Group, destroying it entirely and massacring the Jedi.

Tirien's musing that "[o]ne could never step in the exact same river twice" is a shout-out to Pocahontas. His subsequent perception of Guudria's underground oceans as "sunless seas" and "caverns, measureless to man" is one to "Kubla Khan", a poem by Samuel Taylor Coleridge.

Bras asks Jirdo whether he is "sure [he] can't find new ways to…motivate them?", a play on Darth Vader's ominous promise to Moff Jerjerrod in Return of the Jedi.

Tirien's observation about making theories suit facts, rather than facts suiting theories, was advice originally given by Sherlock Holmes.

The terrain surrounding the tomb was inspired by the Chocolate Hills in the Philippines.

Moments of Truth joins the list of UNSWS works whose titles were changed at the last moment; Sakaros initially planned to title the story Jedi Trap, but felt it gave the ending away.

Retrieved from "https://swfanon.fandom.com/wiki/Moments_of_Truth?oldid=1137123"
Community content is available under CC-BY-SA unless otherwise noted.