As a community, we strive to maintain a fun and creative atmosphere for all users—who we call Fanoneers—while also maintaining a sense of encyclopedic quality that we can show off and be proud of. The best way to help with that is for you, our newest Fanoneer, to begin creatively expressing yourself with your article writing, and to get involved with the community! Need some help with your writing? We're here to offer that help in the Writing Center! Want to work with others? Join a FanonProject! The Senate Hall can also be used for asking about anything relating to Star Wars Fanon, including help in following our policies.

You're probably saying, “How can I get involved?” There are a number of ways that you can do that, which are all listed below, so we encourage you to check those out! Very importantly, there are also a number of policies that you will need to be cognizant of and agree to follow so you can have the best time possible, and to help make our great wiki even greater!

Star Wars Fanon is not about administrators, nor is it about the people who have been given accolades or awards. This wiki is about you, the community member and the valued writer. So long as a sense of encyclopedic standard is maintained, this wiki will continue to be the absolute best it can be, especially once you get involved in our community!

— Aiddat (Holonet) (Additions to the archives)

Hey, Atarumaster88! Sorry if this added message seems a bit overwhelming after the huge welcome message you just received, but what I wanted to say is important enough to re-emphasize it here. I wanted to make sure you were as aware as possible of the fantastic community we have here on the wiki. There is literally so much to do beyond just working on your own articles. I definitely don't want to sound like I'm suggesting you shouldn't work on your own articles, but there's a larger community out there too and we'd all love for you to get involved! If you have any questions about the community, which I strongly encourage you to participate in, don't hesitate to ask me. Thanks, and once again welcome to Star Wars Fanon! – — Aiddat (Holonet) (Additions to the archives)

To maintain at least some form of order, all posts will be responded to on this page.
Do not look for a response on your page.
Do NOT bother me about Wookieepedia on this page, or you'll be reported on this wiki for harassing me.

Re: Title vs DISPLAYTITLE Edit

I gave the go-ahead to remove Title in favor of DISPLAYTITLE. Title affects site speed whereas DISPLAYTITLE does not. I'm not sure why additional characters were removed, but please use DISPLAYTITLE rather than Title now. Thanks. - Brandon Rhea(talk) 23:36, February 13, 2013 (UTC) 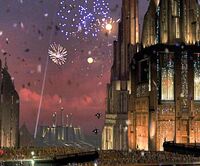 Hello Ataru. Sorry for the delay getting back to you regarding the nomination of War Stories/Death Wish. I'd be honored if you nominated it. I do have limited internet access at the moment, but I will try to get on regularly to check for corrections and edits I may need to make for the nomination to pass. Thanks for considering the story! -- Tesh 162 21:34, March 22, 2013 (UTC)

Hello Ataru. I just wanted to let you know that I have seen your comments on the nomination page for Death Wish and I am currently working on edits, I just have limited access to the internet. I hope to get the edits finished and the story updated by the end of the week. Thanks again for the consideration and your review on the story. -- Tesh 162 14:33, April 8, 2013 (UTC)

Thanks for the notice. I did see that Solus had reviewed the story, but I have been unable to attend to her objections. I do, however, plan on getting to them tonight. Hopefully, I will have it addressed within the next couple of days. I do apologize for the delay. Life is kind of busy right now and other things have taken priority, but I will get to them as quickly as possible. Thanks again. -- Tesh 162 22:30, July 17, 2013 (UTC)

Hello Ataru88. I've noticed your review page, and I was wondering if you could (or have time to) review the story Dawnbreaker: Split Destiny. It was a collaborative writing effort of two other authors and myself. While it does have two prequels, it is a standalone story which isn't really reliant on its prequels, beyond sharing some of the characters and factions. Anyway, it's a long, detailed work, with a sequel already planned, and I'd be really interested in your opinion of it. Thx!  TrueSith'ari (Talk) 11:42, July 24, 2013 (UTC)

Please check again Holonet Transceiver, and see if you can strike out any of your remaining objections.

Hey Ataru. I've asked a couple of times about any suggestions you have based on your feedback in the Participation Guidelines, and I wanted to follow up again. You pointed out that the disruption clause could be exploited and that the "deliberately derailing a conversation" part is open for abuse. Do you have suggestions for how to improve those? For the latter, would removing that specific phrase ("deliberately derailing a conversation") satisfy your concern there? Also, so you're aware, I added the link to the editing policy to the edit war part. Thanks! - Brandon Rhea(talk) 18:18, September 4, 2013 (UTC)

RE: Relevant to your interestsEdit

If only he'd been that decent as DudeShep in the video games. Yes, he kinda gets fractionally better in 2 and a little bit more so in the last game. However, the fact that in the first installment he sounds like a man with a never-ending head cold turned me right off any possibility of playing DudeShep beyond the point where he achieved Spectre status and took command of the Normandy.

Remember that legendary original version of Shadows of the Jedi you've only ever heard of, because it's so horrible? Enjoy. - Brandon Rhea(talk) 04:47, December 24, 2013 (UTC)

re:It Takes Only One Edit

Hi Ataru. Technically I'm not the host, just the FEacilitator. And there's no rule about authors being able to remove their own nominations, so I'll have to mull this one over. Have a FEantastic day. - Brandon Rhea(talk) 18:38, February 24, 2014 (UTC)

Hello i really liked your Force Exile Series and just wanted to know if you have any plans to start up a new series i really like you writeing and your ideas and would love to see what you could come up with again. LupaTiz (Talk) 08:22, March 16, 2014 (UTC)

Please forgive me for taking so very long to get back to you. Truthfully, I would be interested in an Archivist position, but I don't think I can give the role the time it deserves in the long run. I'm starting law school in the fall, and I'll likely be reading extensively for hours every day. I'm concerned about how even my pleasure reading is going to survive that; I know that if I take on obligatory reading duties, especially when they require not only reading but also structural critiques and analysis of content, I'm either going to resent it or put it off, and having been on the nomination side of the Featured Work process, I know the writers here deserve better than that.

RE: Hi there Edit

Hello, Ataru. It's great to see you again. I'm happy to be around for at least the rest of the summer. The last two years were probably the craziest whirlwind I've ever encountered, so it's kind of nice to be 'back in the saddle,' as it were. I trust you are doing well? — Fiolli 16:52, July 9, 2014 (UTC)

You forgot to mention in your blog another type of attention one gets on their articles.

Something I learned a very, very long time ago about the fan fiction community at large is that, pretty much without exception, stories do not get recognized or receive good feedback for being original, bold, or in any other way worthy of praise. They are recognized either for pandering to the depraved mental appetites of the masses of f***ed-up nerds (most commonly melodramatic emotional puke and shameless, abominable sex scenes), or for being so awfully written that they become funny. So even if I really wanted any appreciable number of people to read (let alone praise) my Star Wars stories, there would be no way of making that happen.—The Free Man, MPK[src]

I'm not trying to get attention. I was saying it's funny that someone would use my page to advertise their own, (See comments on the Advertising link, the guy put a link to his article in the comment section of mine.) I was saying as a joke maybe you should have mentioned in your Perspective on Writing blog that some people will try to advertise their own works on somebody else’s. God's Gift to women :) (Talk) 20:09, July 10, 2014 (UTC)

It's not even letting me comment on it, and I'm the author! Weird.

Retrieved from "https://swfanon.fandom.com/wiki/Message_Wall:Atarumaster88/User_talk_archive"
Community content is available under CC-BY-SA unless otherwise noted.