Han Solo was a Human male smuggler from Corellia who went on to become a General in the Alliance to Restore the Republic and, later, the New Republic. Solo joined the Galactic Empire after becoming a smuggler, but he was discharged after stopping an officer from torturing Chewbacca. The Wookiee swore a life debt to Solo because of his actions, and the two became smugglers together. Solo won the Millennium Falcon in a card game against Lando Calrissian and, with his ship, he became a well-known smuggler.

Solo took a job with Jabba the Hutt, but was forced to dump his cargo when Imperial officers boarded the Millennium Falcon. He later ended up on Tatooine, Jabba’s world, and came into contact with Obi-Wan Kenobi and Luke Skywalker, who offered to pay him more than enough money to pay off his debt to Jabba, in exchange for transporting them to Alderaan. They arrived at Alderaan to find only a debris field and the Death Star, which they were forced onto with a tractor beam. Solo assisted Skywalker in rescuing Princess Leia Organa from the station’s prison area, and Kenobi sacrificed himself in a duel with Darth Vader to ensure their escape. This allowed them to flee to Yavin IV, where Solo assisted Skywalker and the Rebel Alliance in destroying the Death Star.

For many years, Solo remained with the Rebel Alliance, participating in the Battle of Hoth before being captured by Darth Vader and given to Boba Fett for transport to Jabba the Hutt. One year later, Solo was rescued by his friends and went on to participate in the Battle of Endor, helping to destroy the second Death Star. The destruction of the station killed Galactic Emperor Palpatine, leading to the formation of the New Republic in place of the Empire one year later.

Solo married Princess Leia in 8 ABY. Together, they had three children: the twins Jacen and Jaina, and Anakin—the latter named for Leia’s father, Anakin Skywalker. Solo remained a General in the New Republic and fought in the Yuuzhan Vong War, in which Chewbacca and Anakin were both killed. The Vong were defeated and the New Republic became the Galactic Federation of Free Alliances, but the threats continued and Jacen fell to the dark side of the Force and became a Sith Lord before being killed by Jaina. Solo went on to have a contentious relationship with the Galactic Alliance.

Other uses of Han Solo 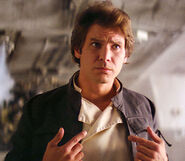 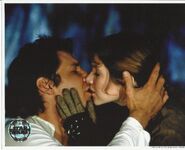 Add a photo to this gallery
Retrieved from "https://swfanon.fandom.com/wiki/Han_Solo?oldid=1148211"
Community content is available under CC-BY-SA unless otherwise noted.