Desperate Times is the eleventh installment in Sakaros's almost-comically-at-this-point-Untitled New Sith Wars series and, as the first part of The Force of Desperation Duology, the companion novel to Desperate Measures. In the wake of the assassinations on Anaxes, Narasi Rican hatches a bold plan to restore her master's connection to the Force while, the galaxy over, beings from all sides hunt the elusive Darth Alecto. 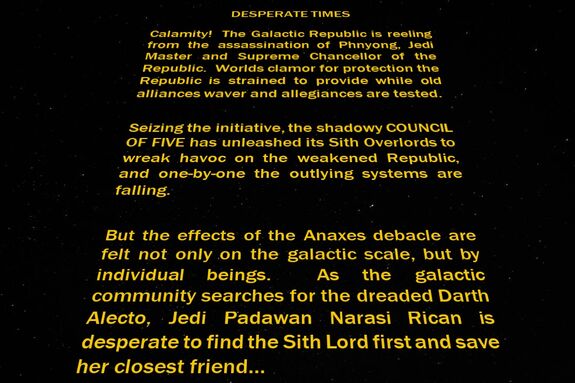 In 1,391 BBY, shortly before the mission that ends in Suwo Tolp's death and Tirien Kal-Di's Knighthood, the two Jedi meet with information broker Sorin Ruy'the, who gives them the location of a Sith Candorian Plague manufacturing site: Thissipias.

In the present, Narasi Rican participates in a raid on a Sith Intelligence site seeking information about Darth Alecto, but strays close to the dark side while interrogating the Sith until Slejux Nissatak, her acting master, restrains her. On Coruscant, Tirien is still struggling with having lost his Force powers and his place among the Jedi, while on Anzat, Nevya Khiyali struggles to hold the Brotherhood of Shadows together in the absence of their new master, Darth Alecto. Tirien seeks guidance from Jedi holocrons, but his reunion with Narasi is awkward and uncomfortable for both: Tirien feels he has failed to pull himself together for her, while Narasi blames herself for Tirien's condition.

Frustrated by her failure to find Alecto, Narasi reconnects with Aldayr, who has returned to Coruscant with Mali. When Slejux, concerned with Narasi's attachment to Tirien and her rising anger, announces that they will cease participating in the raids, Narasi and Aldayr hatch a plan to follow an Intelligence tip to Skorrupon, not knowing it is a false lead set by the Sith as a trap. When Mali and Slejux realize what has happened, they go in pursuit, leaving Tirien behind. On Anzat, Nevya discovers the Sith do not know where Alecto is either and leaves with a handpicked team to find her.

Aldayr and Narasi fall into the Sith trap and are captured. On Coruscant, Tirien hunts down an old criminal contact for Sorin Ruy'the's current location. When Mali and Slejux report the capture, Tirien follows the tip to Kwenn Space Station. Nevya and her Anzati tear apart the Brentaal underworld for news of Alecto, but ultimately concede their master is not there and spread out over the Hydian. On Kwenn Space Station, Tirien gets an audience with Sorin and finds out that Alecto is in hiding on Bogg 14.

Narasi and Aldayr are kept captive in an unfamiliar dungeon and begin plotting their escape. Tirien follows the lead to Bogg 14, navigating its crime-ridden streets to find Alecto in a bar. The two fight briefly, but just as they come to a stalemate, they realize that they have both lost the Force.

The holocron gatekeeper Tirien and Master Robulg consult is Deesra Luur Jada from Star Wars: Knights of the Old Republic.

The access code to the upper level of Rosstark's where Alecto is hiding is 1-1-3-8, continuing the Star Wars tradition of giving things the numerical designation 1138 in honor of THX 1138, George Lucas's first film.

Retrieved from "https://swfanon.fandom.com/wiki/Desperate_Times?oldid=1119217"
Community content is available under CC-BY-SA unless otherwise noted.