Desperate Measures is the twelfth installment in Sakaros's dishearteningly-still-Untitled New Sith Wars series. The second half of The Force of Desperation Duology, it is the sequel to Desperate Times. As Narasi Rican and Aldayr Nikodon struggle to escape the clutches and torments of the Sith, Tirien Kal-Di and Darth Alecto reluctantly join forces to track down the mad alchemist Kai Latra. 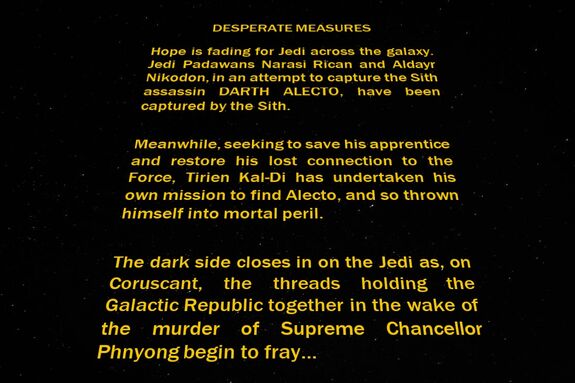 On Coruscant, members of the Jedi High Council struggle to select a nominee for the vacant post of Supreme Chancellor of the Galactic Republic, amidst assaults by the Sith, dissension from inside the Republic, and pressure from Corellia to appoint Nawsa Arodion, a Corellian.

On Bogg 14, Tirien and Alecto realize Alecto was betrayed by Kai Latra—where she was supposed to have a genuine cure for herself for the poison that killed Supreme Chancellor Phnyong, her "cure" was spiked with the same alchemical toxin that deprived Tirien of his Force powers. Alecto, unable to trust her fellow Sith or her Anzati in her powerless state, joins forces with Tirien and agrees to take him to Kai Latra to get the cure to their Forceless state, though she makes him discard his transceiver beacon. The Anzat Zarrke, who has tracked Alecto to Bogg 14, recovers the transceiver and attaches a homing beacon to Alecto's Scourge before contacting Nevya Khiyali.

Narasi and Aldayr escape confinement, but struggle through a dungeon full of alchemical horrors trying to find the way out; Aldayr has been fitted with a restraining bolt on his cybernetic arm. Tirien and Alecto arrive on Vjun, where Kai Latra has his stronghold, and their hostility to one another weakens as they unwillingly start to see each other as people. As Narasi and Aldayr work their way through the castle, they are attacked by Olik Gryfe, a former AgriCorps Jedi who has been the subject of alchemical mutations. Narasi unsuccessfully tries to get Olik to return to the light before the Jedi are forced to escape him and leave him badly maimed.

Tirien and Alecto successfully infiltrate Kai Latra's fortress and narrowly survive a brush with Cuddles, Kai Latra's Sithspawn acklay. Narasi and Aldayr find a prison full of captives and a slave reception chamber and hatch a plan to free the slaves; though Narasi realizes Kai Latra is present and could help Tirien, she puts helping the innocent first. Tirien and Alecto observe the slave chamber and clash over slavery. When the Padawans are discovered, Narasi sparks a fight between the Zygerrian slavers and the Sith while Aldayr goes to free the prisoners and finally gets the restraining bolt off his arm. Amidst the riot, Nevya's strike team infiltrates the castle and kills the Acolyte Lygrot.

Tirien and Alecto confront Kai Latra; while Alecto fights Ugor, Kai Latra's Ugnaught Sithspawn lackey, Tirien duels and overcomes Kai Latra. Alecto and Tirien force Kai Latra to hand over the cure, but there is only enough for one. Just before the two can come to blows, Tirien observes two of Kai Latra's Acolytes about to ambush Narasi and runs to her rescue. He duels them to distract them, but when Narasi observes the fight and tries to return, Tirien submits to death so she will run. The act of light overpowers Kai Latra's alchemy and restores Tirien's Force powers; he escapes along with the Padawans aboard the Second Chance when Mali and Slejux come to the rescue, having tracked the beacon transceiver Zarrke took, Olik sacrifices himself to cover their retreat.

Alecto takes the cure and recovers her Force powers, but though she unleashes her Anzati on Kai Latra's Acolytes, she strikes a deal with Kai Latra to work against the true source of the betrayal—Targere. The Jedi return to Coruscant, where the slaves are released to Republic protection while the Padawans endure the chastisement of the High Council. Tirien and Narasi enjoy their reunion, but while Tirien makes amends with Master Honsu Toldin, Narasi and Aldayr kiss.

Both the first and last lines are shout-outs: Vice Chancellor Corruss's opening comment "I don't know how much sooner I can push the vote, my friends" is a play on Palpatine's first line in Attack of the Clones, while Master Toldin's line that concludes the novel—"May the Force be with you, Tirien. Always."—is a play on Obi-Wan Kenobi's reassurance to Luke Skywalker in A New Hope that "The Force will be with you. Always." Meanwhile, Mali's congratulations to Narasi for making the shot that destroyed the Zygerrian turbolaser—"Great shot, kid! That was one in a million!"—is word-for-word Han Solo's congratulations to Luke Skywalker for blowing up the first Death Star in A New Hope.

Kai Latra's organ chamber is made of nuummite because, according to this website, it is "the Sorcerer's Stone".

Kai Latra's affectionate relationship with his acklay Sithspawn, Cuddles, was inspired by the Evil Overlord List; while Kai Latra flagrantly violates Rule 28, he compensates with Rule 48. Cuddles itself (a three-headed guardian of the deepest, darkest parts of the Palace of Happiness) was inspired by Cerberus.

Sakaros watched clips of the Petranaki arena battle from Attack of the Clones repeatedly to reproduce, as accurately as possible, the various sounds made by an acklay via onomatopoeia.

Retrieved from "https://swfanon.fandom.com/wiki/Desperate_Measures?oldid=1119219"
Community content is available under CC-BY-SA unless otherwise noted.