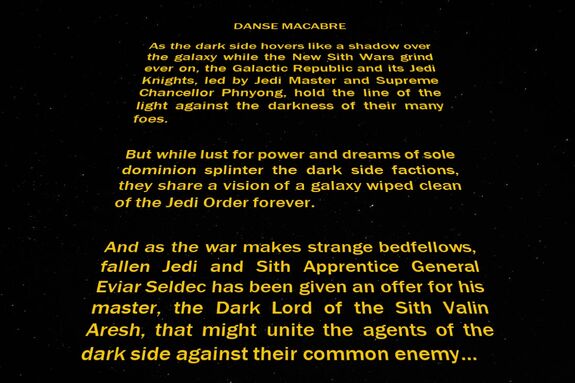 General Eviar Seldec has been approached by Lord Targere (on behalf of Darth Saleej) with an offer for his own master, the self-proclaimed Dark Lord of the Sith Valin Aresh. Saleej proposes the two factions joining forces to assassinate Phnyong, a Jedi Master serving as Supreme Chancellor of the Galactic Republic. Though he loathes the alien Saleej, Aresh ultimately agrees to support the plot in order to weaken the Jedi and draw fire off his own empire, which will allow him to consolidate his holdings and deal with persistent raids from the Crusader and its fleet. Seldec meets with Targere and Darth Alecto, and the three ultimately agree on terms; Targere and Alecto verbally spar as Alecto prepares to execute her own part of the plan and Targere arranges contact with the Gossam Sith alchemist Kai Latra.

Tirien Kal-Di and Narasi Rican travel to Anaxes, where Chancellor Phnyong will be attending the graduation ball at the Republic Navy War College; Narasi is excited by the prospect of finally meeting the Chancellor. On Anaxes they meet Miraluka Jedi Knight Kenza Rowkwani, leader of the advance team. While Kenza and Narasi go out to buy ball gowns, Tirien receives a communication from Arlya Kesk, one of the Jedi Knights trained by Master Karr Shadeez; Arlya asks to meet, and Tirien agrees. After investigating a disturbance, Narasi and Kenza discover that FastLane Couriers has been running supplies into Sith territory and refer the matter to Republic Intelligence. Kenza hopes to flip FastLane's proprietor, Antifol Wolt, and his captain, Gravo Fenjen, as spies in Sith territory, but unbeknownst to her, Gravo smuggled Dark Vanguard members Second Besh and Third Aurek in; to ensure Antifol does not crack under interrogation, Second Besh telepathically pressures him into committing suicide.

Days later, Chancellor Phnyong is arriving; Narasi is very taken with Prince Taylo Organa of Alderaan, but the Chancellor's First Secretary pressures Narasi to leave so the Chancellor is not seen with a Zygerrian; sensing Tirien about to fight on her behalf, Narasi goes to talk to Kenza, who has been feeling guilty about Antifol's suicide. Tirien, meanwhile, receives the Chancellor and confers with Raven Kaivalt, a Jedi Knight and descendant of the legendary Donarius Kaivalt, who is also ensuring Phnyong's security. Meanwhile, Nevya Khiyali, Darth Alecto's second-in-command of the Brotherhood of Shadows, spies on Anaxes Citadel with Second Besh. Each side plans to support the other while also keeping its own details from the other.

The night of the ball, Narasi endures more harsh commentary about her, but is comforted by Phnyong, who seeks her out to talk to her and reassure her about her value to the Order; Prince Taylo asks her for a dance, and they waltz. Meanwhile, the Anzati infiltrate by air, killing the snipers on the roof while Nevya duels and kills a Jedi Knight; with the path cleared for the Vanguardians, Nevya and Zarrke infiltrate the ball as guests. Tirien works the room, but is startled to discover a disguised Darth Alecto among the guests; he waltzes her away from everyone else and out of the room, fearing that causing a scene might send some signal to unseen confederates.

Second Besh and Fourth Mern reach the Citadel's roof, but are intercepted and killed by Kenza. Narasi breaks off her waltz with Prince Taylo to protect Chancellor Phnyong, who is under attack by Third Aurek. She and the Chancellor's Senate Guards hold the Dark Jedi off long enough for Raven Kaivalt to come to their aid and kill Third Aurek, but beings in the ballroom begin to die anyway. Tirien realizes Alecto has poisoned the wine, but having been poisoned himself, he is too weakened to stop her. Taking an antidote, Alecto offers Tirien the other before escaping. Tirien gives the antidote to Narasi, ordering her to save the Chancellor, but when Narasi finds him dead, she injects Tirien instead.

The Jedi struggle with their grief and the immediate fallout of the Chancellor's murder, but Tirien comes to another, horrifying revelation: he has lost his connection to the Force.

After initial mentions in Shots Fired and periodic mentions since, Supreme Chancellor Phnyong and Sith Lord Valin Aresh make their first appearances in the saga in Danse Macabre.

The story was named for both the medieval religious art motif and the tone poem by Camille Saint-Saëns. The latter serves as the author's envisioned soundtrack for the novella's climactic waltz.

No canonical or Legendary explanation is given for the existence of both the Republic Naval Academy on Prefsbelt IV and the Republic Navy War College on Anaxes; Sakaros took a shot at explaining the apparent discrepancy.

Retrieved from "https://swfanon.fandom.com/wiki/Danse_Macabre?oldid=1119215"
Community content is available under CC-BY-SA unless otherwise noted.