My army is highly skilled, trained and spirited, should Republic forces ever manage to land on my world, then my army will swiftly rout them!—Jane Zarkan to Count Dooku, on the CSA

The C. S. Army was founded in 21 BBY as a successor to the Confederation Army of the Western States Confederation, an army formed of the national armies of the member states of the WSC working together under a common organisation.

The CSA would see only a little service in the First Battle of Earth, most of the fighting being done by the Confederate States Navy, however CSA forces would quickly rout the few Republic forces that managed to breakthrough the Separatist blockade and reach Earth, resulting in a decisive Separatist victory and the capture of Jedi General Maksi Hikar.

The CSA was made up of both organic soldiers and droids. The Confederate States Army Aviation Corps (CSAAC) was the branch of the army which dealt with army aviation, the army equivalent of the Confederate Naval Air Service.

The CSA was widely respected across the CIS for being one of the Separatist Alliance's strongest and most elite ground forces, being rough equals for the Clone army of the Republic, the clones which fought the CSA, and Jedi General Maksi Hikar himself, were suprised by how skilled the CSA were at combat.

The C.S. Army also won a lot of respect amongst their foes of the Union Army. The C. S. Army was widely considered as one of the finest fighting forces in the history of Earth.

In 18 BBY the CSA fought against the forces of the Galactic Empire and the Imperial puppet government, the Earth Empire, despite the CSA's general elite combat skills and training, the CSA was defeated, one of its critical blows was at the First Battle of Mollun, in which Field Marshal Alexander Norman, a veteran leader of the Earth Civil War, was killed whilst leading the Army of the Zarkan Kingdom. The CSA finally surrendered following the Battle of Zarkan City.

The C.S. Army was divided into several branches, including the Infantry, the basic foot soldiers, the Cavalry/Mechanised Infantry, which were infantry units trained for combat involving fast-moving personnel carriers, the Tank Regiment, which focused on armoured vehicle warfare, the Confederate States Army Air Corps, which was the aerial branch of the army, and the Confederate States Signal Corps, which dealt with information and communications.

The CSA mostly used Separatist-supplied equipment, however it also used native equipment, equipment supplied by the Rebel Alliance and equipment captured from Republic/Pro-Republic and Imperial forces:

The CSA used numerous different vehicles, though most of the vehicles operated by the CSA were either supplied by the Separatists or of native design, though the CSA also received numbers of Rebel Alliance vehicles following the Liberation of Earth in 4 ABY, small numbers of captured Republic and Imperial vehicles were also operated. 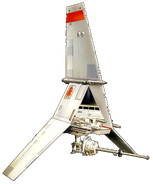 The T-16 Skyhopper, operated by the CSAAC and CNAS as the Skyhopper-class Patrol Aircraft 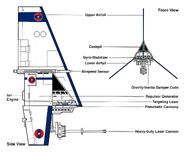 Schematics of the T-16, showing the standard CSAAC/CNAS paint scheme

As with the other branches of the Confederate military the Army wore grey, ranging in colour from light grey to dark grey, the uniforms of the enlisted ranks tended to be of a lighter shade of grey than those of the officer ranks, the battle dress of the enlisted ranks looked coincidently somewhat similar to the officers of Darth Revan's Sith Empire. Enlisted soldiers wore the standard uniform with either a grey campaign hat or helmet, junior officers wore an officers uniform with a forage cap, whilst senior officers wore a dark grey officers uniform with matching officer's cap or wide-brimmed Stetson.

The "Field Army" was the second-largest organisational unit, after the "Department", field armies were typically comprised of the entire amount of units donated to the C. S. Army by each of the Confederate nations, each nation had a degree of control over their own forces, but general strategy was discussed within the Confederate States Department of the Army, the overall headquarters of the entire army which would then decide upon the best course of action, and which units to take part in the action.

The "Blue Star Flag", an unofficial national flag of the Confederacy, and a generic War Flag flown by many different units

A variant of the "Stars and Bars" with an unusually short canton, this flag was the War Flag of the 10th Drelan Infantry Regiment, and was captured at the Battle of Drelansford

The "Freedom and Our Rights!" flag, variant of the 10-star "Stars and Bars", the first national flag, War Flag of the 11th Westland Infantry Division

Original variant of the War Flag of the Perote Guards - Company D, 1st Z. K. Infantry Regiment, adopted at the founding of the unit in 26 BBY

The "Confederate Rights Flag", War Flag of the 3rd Zarkan Kingdom Infantry Regiment, an example was captured by the Union during the Invasion of East Vertania

The "God Protect You" flag, a homemade version of the 10-star "Stars and Bars" flag, used as a War Flag of the 17th Zarkan Kingdom Infantry Division after it was presented to them by the girl who made it

Alternate War Flag of the 89th Zarkan Kingdom Infantry, the flag flew over the 89th's home base of Fort Indomitable

The "Our Land and our Cherished Rights!" War Flag of the 1st Wielvakia Infantry Regiment, the motto came from the unofficial anthem "The Flag of the Free Nineteen" 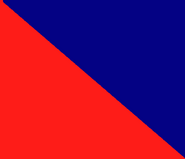 War Flag of the Army of the Border

Battle Flag of the 19th Zarkan Kingdom Infantry Regiment, one of the most decorated and illustrious regiments

The banner of the Free Duchy of Northern Zarkania of 1,000 BBY, served as the Regimental Colours of the 32nd Zarkan Kingdom (Northern) Infantry Battalion

War Flag of the Army of Valand

The "Anderson Flag", the War Flag of the Army of Leasath

War Flag of the Army of East Vertania

War Flag of 1st Princeland Infantry Regiment, Army of Princeland, captured by Union forces at the Battle of Queenstown

War Flag of the 1st Royal Volunteer Rifles, Army of Princeland, also captured during the Battle of Queenstown

War Flag of the "Georgian Fusiliers", the oldest continuously operating regiment by 21 BBY

"Large Stars and Bars", General Michael Ventnor's Headquarters flag, and Command Flag of the Army of the West

"Ventnor Battle Flag", War Flag of the forces of General Michael Ventnor, who served in the Western Theatre

War Flag of the 9th Arstotzka Infantry Division, based on a variant of the 13-star "Stars and Bars"

"Freedom and Nations' Rights flag", the War Flag of the 8th Erastan Infantry Division, and a popular rallying flag

This unusual non-regulation flag was captured from an East Vertanian militia by Kallandan forces during the Liberation of East Vertania, later returned by Kalland as a good will gesture following Kalland joining the Confederacy

The flag of the Republican Army of the East, which later joined the C.S. Army after Vertania joined as the 12th Confederate state 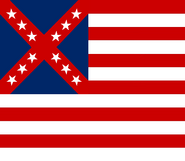 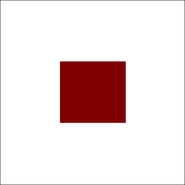 The War Flag of the Confederate States Signal Corps

The 10-star Guidon variant of the "Stars and Bars", most often used as a War Flag by Mechanised Cavalry and Mechanised Infantry units

A small 3ft x 2ft 14-star "Stars and Bars" variant that served as the colours of a Leasath Army unit, captured by Tobias Franks' Union Army of Leasath during Franks' Advance on Alendal

This highly unusual example of a 15-star "Stars and Bars" flag served as a War Flag of Company F, 2nd Hiland Infantry Regiment - the "Summitsville Riflemen".

A flag of "No Quarter" raised by General Ventnor's Army of the West during the Etora Rebellion, symbolising no native rebels will be taken as prisoners of war

Community content is available under CC-BY-SA unless otherwise noted.
Advertisement